Records We Need To Talk About: The Year End List Part VII 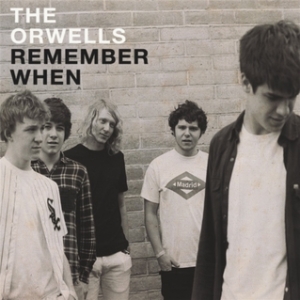 The Orwells/Remember When – Autumn Tone records released this one. Also known as the label funded and fueled by Aquarium Drunkard. I can say they are my favorite music blog, Noisey aside. (Note, if you haven’t been reading Noisey, you’ve been missing out.) Aquarium Drunkard did a session with them which is available for download here. Pitchfork did that thing where they review tracks. They stupidly did not name it a Best New Track. But SPIN Magazine did tell us to “watch out!” for them back in September. Their single at hand, “Mallrats (La La La),” isn’t the best on there, but it sure is catchy. Slower tracks “Halloween All Year” show us what this band can really be. And the garage rock, cymbal fueled (hell, the whole record is) “In My Bed” [below]  is even better. It makes me want to shout along to the chorus “what she said/in my bed/said she wished that/i was dead” as well as jump into bed with them all. But beware, these kids are quite kids – clocking in at 18 and 19 years old. Makes it more fun, doesn’t it? Especially when they have sing-a-longs with lines “we got this fear of aging.”

nothing about this record is in fact, Ugly

Screaming Females/Ugly – out on Don Giovanni Records. This is the Females’ fifth record. While I am not proud of being from New Jersey, I can be proud to say that they’re from New Jersey. My friend Andrew who introduced me to this band told me a story about this one time when the Females came to play in his small college town of Oneonta, NY and they crashed at his house. A party was had, and I do believe their floor was peed on. The moral of this story is The Screaming Females rock really hard. I’ve never heard a woman scream like Marissa Paternoster screams, at times it’s unsettling. But you’ll get over it because she does something you’ll never be able to do. She’s Marissa Paternoster (she also makes a lot of ‘strange’ art that kicks ass.) I’ve also never seen anyone shred quite like her. What really turned me onto this band was the Undercover session they did with the AV Club. Strangely, they covered Sheryl Crow’s “If It Makes You Happy.” Not your typical rock-thrash, but they turn it into one. Jarrett Dougherty slams the drums for them and King Mike is on bass. The bass line kills it on “Red Hand” [below]. This trio will lash out at you, so get ready. Also, give them money so they can keep on keepin‘ on.

see, its a chameleon

This next one is the band that SHOULD’VE won The Mercury Prize. Instead of Alt-J, whose record is boring and predictable. Every time I hear “Triangle Is My Favorite Shape” I thank God that I have friends who all also hate this record and realize how dumb it is that they won the Mercury Prize. I thought England was supposed to be exciting, the kind of place that awards the prize to the same person only twice – and to a woman. The well deserving PJ Harvey. Django Django was gypped and we are all getting hosed.

I wrote about Django Django‘s record, Django Django, over at Chunky Glasses a while ago, before they had lost. I was sure they would win. As you can see I’m still sour about it. (By the way, it’s pronounced “jango-jango” don’t make the same idiot mistake I made and say it wrong for a near six weeks.) This English band harmonizes and synthesizes its’ way into your heart. And their record is full of rolling hills to get lost in and thumping beats to soundtrack your chase scenes. Out on Because/Ribbon Music Django Django is a promising first record.”Love’s Dart” [below] is one of many tracks that highlights the band’s percussive efforts – which are endless. This record came out in January and has been floating around for too long without anyone noticing. So start noticing already!

consider this their debut cherry

This next one is Divine Fits. Their record, A Thing Called The Divine Fits, is everyone’s favorite. (Out on Merge.) People can’t get enough of this indie supergroup. And despite the Internet’s/the band’s efforts of making sure no one calls them that, I’m going to call them that. Because that’s what they are. I heard about this band when the record was assigned to the first – and sadly only – Chunky Glasses Podcast I would be taking part of. I started listening to this record and couldn’t put my finger on the lead singer. “I’ve heard this man somewhere before,” I said aloud to my empty apartment. I soon realized that it is Britt Daniel of Spoon. He plays and writes alongside of Dan Boeckner (from Wolf Parade and Handsome Furs) and Sam Brown (of New Bomb Terks.) This record is synth heavy, with tracks like “Baby Get Worse” that, well, make me wanna get worse. The chorus from this is perfect because of the puny line “my heart was beating in and out time,” which I just love. “Civilian Stripes” and “For Your Heart” that follow it are fun and tasty, satisfying that craving you had for rock music. Their cover of The Boys Next Door/The Birthday Party song, “Shivers” may be the perfect track 9 because it makes you pay attention to their detail, if you weren’t already. And my favorite track on the record is “Like Ice Cream” [below]. The line “she waited for me like ice cream/i’m dry ice in the summer/she waited for me like ice cream” doesn’t even make any sense, but I don’t care. Because it is quintessential and sounds just right coming out of Daniel’s mouth.

When I saw Here We Go Magic live I was unsure about them because I hadn’t, at the time, listened to their record much. (I then spent the entire Spring listening to it and not much else.) A Different Ship is more than just Luke Temple‘s brainchild. It’s a record full of really cool arrangements and progressions that a lot of indie bands aren’t mastering. Here We Go Magic echoes their reverb-ed folk whispers on this record. And they use their bass lines to dance you around your living room. Out on Secretly Canadian, it is the band’s fourth release, their third full length. You might remember them from when earlier this year they tweeted about picking up the hitchhiker (and filmmaker) John Waters. Or you might just know them because they kick ass. Their track “Make Up Your Mind” is so swirly and will submit you in such a trance that, as I write about it right now, I’m sucombing to its voodoo. So, I will send you over to my friend Rusty (who also live-tumblr-ed their show while I was standing next to him) who wrote about them on Chunky Glasses for his year end tracking list. “Alone But Moving” is slow and romantic. “I Believe In Action” picks up the pace. “How Do I Know” [below] makes you know for sure that you love this band. The OooooOO-EEEeee–ooo’s in the chorus is what does it. They’re called Here We Go Magic because, well, you know why.

← We Will Not Fear. We Will Fear Fun. Father John Misty Finally Shows Up On The Year End List
Even Though I Hate Them, I’m going to word-vomit all over you about Pitchfork and Rolling Stone: the year end list has no end →

One thought on “Records We Need To Talk About: The Year End List Part VII”