We Will Not Fear. We Will Fear Fun. Father John Misty Finally Shows Up On The Year End List

If you haven’t noticed, I listen to the radio a lot. I also make radio. For the last six years I’ve been getting paid to make radio. This next story starts on the radio too. (Like how almost all of them start.) Sirius XMU (which I mention a lot because, if you haven’t figured out yet, I work there and pretty much listen to either the radio or music all day) was playing “Hollywood Forever Cemetery Sings”. It is a song that beats perfectly along to itself, but has the ability to annoy anyone with ears. It was only after a few months that my co-worker had the record on and I realized what I was missing.

“Is that Father John Misty?”

“Damn, that’s great. I never listened to it because that single pissed me off.” “Me too,” he replied.

When you’re hearing the rest of the record for the first time, you can’t believe that it’s the same artist. You also can’t believe that he picked the (albeit catchiest, hookiest) most irritating song on the record to be the single. The rest of this record is full of folk and spice. It even has eye-busting art. Track 2, “Nancy From Now On” [below] leaves you feeling breezy. Even with lyrics like “pour me another drink/and punch me in the face/you can call me Nancy”.

Maybe “Hollywood Forever Cemetery Sings” sounds likable when you listen to the record as a whole, which can strangely happen to me every once and a while. But most of the time, it’s that ONE song that’s just over and over again. The thumping dissonence to it really turns me off. Which is strange because “Writing A Novel”, which immediately follows it, might be my favorite track (although, I’m still undecided.) It has that rhodes piano and that Tweedy Twang that I love oh-so-much. The story he paints progresses like a novel too. You can really relax and fall into this album. And as much as I like to thrash around to The Men and Japandroids, I love just as much to sit quietly and groove on a folk record. All you Wilco fans know what I mean.

Tillman used to be in this group called Fleet Foxes. You might have heard of them. Fleet Foxes made everyone’s favorite record of last year, Helplessness Blues. And they made it with Tillman, their drummer who also sang and helped write. Some people might think it was foolish of him to leave a group that had just topped themselves, the group destined for further success. Or that it was worthless for him to leave. But it wasn’t. Tillman was brave for leaving. And it was well worth it because he made Fear Fun. And he toured on it too. 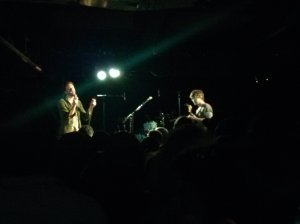 Tillman was in the Red Room Bar at the Black Cat after the show and we talked for quite some time. I had complimented him on the show. They were all fabulous. He sang as a frontman, not even hiding behind a guitar. Tillman was in his element. And the crowd went wild for him. I told him that I was so happy he left Fleet Foxes. And he agreed. Tillman told me that he left because he wanted to try a number of different things and the rest of the band didn’t. Artistic differences is a story we’ve all heard before. But it never gets old because it’s completely honest. In addition to all of the beautiful harmony on Fear Fun, which is what kind of makes Fleet Foxes Fleet Foxes, we got a lot of pop and strings and synthesizers and steel guitar and piano and organ and wurlitzer (almost all of which was played by Jonathan Wilson, who also plays on the likes of Dawes records.) The lyrics all sound like the plot to a dream you once had. The album reads like poetry.

I don’t remember too much of the conversation, but I can tell you he was very tall and very friendly. A charming man. Who made THE charming record. “Only Son Of A Ladies Man”, “Sally Hatchet” and “Well, You Can Do It Without Me” [above] are seamless. Later, “Tee-Pee’s 1-12” is full of hand claps, violin and slide guitar. It’s all perfect. The lyrics are full of stories and tidbits about Tillman and how he’s a Dodgers Fan. You can picture the scenes easily. The lyrics aren’t a mouthful, they’re vignettes: “We went out to the garden shed/where I took off all my clothes” and “if they tell you you’re a genius but you need some proof/ask anyone on the payroll to go out with you/if they avoid you/they’ll award you/definitely.” And “Milk & honey flow, just a couple states below.” I could write out the whole record because it’s ALL that good. But instead, you can hear it here because Sub Pop loves their fans and the whole record streams on youtube. Now get goin’.

2 thoughts on “We Will Not Fear. We Will Fear Fun. Father John Misty Finally Shows Up On The Year End List”