It was a great first show at DC9 for me. Having been there before only as a patron, it was nice to use it in a different capacity. One of the smaller venues in the city, the second floor performance space at DC9 has a TV in the back, so stragglers can get a good view. The stage is a step up from the floor and welcomes the likes of bands who still do all their own setting up. Something about that is humbling. Once a band gets past a certain level and leaves it up to someone else to set up their own gear, something is brought into question. Aren’t we seeing any band in the first place because they’re excellent at what they do? And when they leave it to someone else to take care of – now they don’t do what they do anymore. I don’t hate to say it changes my mind about a band. It certainly depends on the band, and their fame and how they got there. [Like for instance last night when Best Coast made the sold out crowd at 930 wait an extra 20 minutes for a guitar hand to tune Bob’s 12 string, my head was stirring with “Why are we waiting for you? So you can play the same song over and over again for an hour?” Definitely not worth the wait. And worth every dirty look as I edged my way out of there early.] Maybe it’s just me, but there’s something about a band’s popularity and the music they make that speaks to the way they behave as famous or as musicians. Or as people who really want to be there: in it. Being a band and being responsible for all its moving parts.

The arrival of The Men’s new bassist, Ben Greenberg, brought a new output to the band and a different sounding record. A friend and punk-realist told me that They’re Falling Victim to the Hype Machine, Which Will Eventually Kill Them. Their new record, Open Your Heart, has found more success (As in more people listen to it? Or more people might know who they are? Or more people like it? You be the judge) than their previous two records in the last two years, respectively. It’s reportedly more accessible while it explores more than one style of music (country, doo-wop, surf rock) than 2011’s Leave Home – which could just be left alone as a great hardcore record, if you will.

We could be arguing that The Men have lost their hardcore edge because they’ve been noticed. Or maybe its because they save their seven minute songs for later in the record, now they can arrange a record. And they know how to play it. Or maybe like any band that’s ever existed, they wanted to change because making the same music over and over again is boring. [Every band changes, Bethany. Don’t be afraid to try something new.] 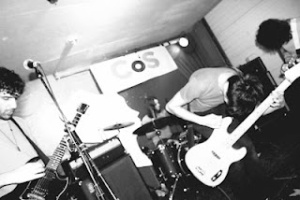 Regardless, the point here is that The Men are a great live band. Energetic as hell, they played on one of the hottest nights DC has seen all summer to a sweaty, sold out crowd. Ben Greenberg certainly is a noticeable bassist. He thrashes around and never loses control of his instrument. Mark Perro and Nick Chiericozzi, both on guitar, sing in different styles and both wail, complete masters of their six strings. Their drummer, Rich Samis, knew what he was getting into and played shirtless. He played without a doubt some of the best rock drumming I’ve ever seen live. He never got lost in his mop of wet long hair and kept the pace. Easily the most fun anyone could ever have at their job, The Men did us proud and rocked our faces off, albeit a too short 50 minute set. They’re out west for another couple months and in later September they head abroad. So go get ’em while you can.