There’s no other way to say it. Kanye Is Back. But…did he ever leave? A persistence in our persistent feed, Yeezy is a man of many words. And even though they’re all over the place, the message seems to be pretty clear.

“Monster about to come alive again,” he opens with “On Sight.” He tells us again on “Black Skinhead,” “I’ve been a menace for the longest/but I ain’t finished/I’m devoted/and you know it.”

Every line on Yeezus preaches the church of West (and yes, he’s already compared himself with Malcolm West.) There are so many to choose from and through them all, “I’d rather be a dick than a swallower,” seems to by Kanye’s life mantra.

We celebrate him for being excellent at what he does. Yet we complain because he’s a pompous, self-centered ass. He bites the hand that feeds him, we complain. We tell ourselves that we’ve had enough. But the fact is, the hand that feeds him is one of the most complicated history has known. If you want to yell at America for being racist and classist, you can (because we are). You can also complain at the misogyny on this record – because it’s everywhere. (Actually, it’s overwhelming. But when has Kanye, or hip hop’s misogyny, ever been anything else? Note: this still doesn’t make it OK.) America constantly tries to fight the sexism that’s woven into our culture. And, while we work towards ending racism, we seem to be stained by it. Some people are more up front about it than others. It’s a complicated issue. Kanye is a complicated issue.

Yet, the greatest part about living in America is that you can yell about all these things, however you want, no matter what side you’re yelling from.

With a new kind of performance art, from his global building projections, that are more than just headline generators, to his SNL performance (that knocks it out of the park), it turns out his entire career trajectory is a performance art. And Yeezus is just the next act. He surprises us by putting us in a constant state of “what’s next?” And the answer, this time, seems to be the trance of Yeezus (like on “Hold My Liquor”). When is the last time someone projected their face on buildings internationally to debut new music? When is the last time hip hop went on nationally syndicated live television to premiere new music? (New music that is, well, kind of scary?) He knows how to play the field and he knows what “performance” “art” is. After all, he started off as a producer. 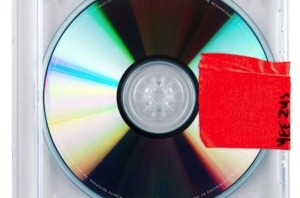 Yeezus is only 10 tracks, which feels short. It’s amazing how fast this record flies through your imagination. In the beginning it doesn’t even sound like hip hop. It’s better. It’s dark and beating all over the place. He cuts the bass with a children’s chorus in “On Sight” not two minutes into the album. Everything about it is a perfect opening track: it sizes you up and breaks you down preparing you for what’s ahead, like boot camp. (I wish I could listen to that song for the first time, every time.)

Track arrangement on a record is still an art and Yeezus bleeds all over itself. West uses the crescendos and rise and fall of trill and whatever it is EDM does these days. “Black Skinhead” pants and chants and drops the beat (they all do.) Yet, Yeezus is full of discomfort and darkness. And when it does makes you feel good, you are second guessing what “good” exactly is. It’s an attack, simultaneously, on the conscious and subconscious. It jumps while it jumps out at you. Yeezus shows us that it does feel good to be bad (if we didn’t already know.)

The other theme here is the lyrical racism (so he’s allowed to do it?) See: “stop all that ‘coon shit,” “eating Asian pussy/all I need is sweet and sour sauce” and “Indian head no moccasins.” Even though the stain is stated as a lifetime away (in the textbook version) Kanye is here to remind us how present it is and how much we are able to ignore it.

The same way we can’t complain about the front row misogyny (“your titties/let ’em out/free at last” and “black girl sippin’ white wine/put my fist in her like a civil rights sign”) we have no reason to be surprised that he plays the race card. The fact is Kanye didn’t really surprise any of us. Expecting shock, because he’s a self-proclaimed shock master, Kanye did his job. The man aims to displease: its part punk and its part whatever drunk outlandish Kanye would’ve promised you at four in the morning. The actual surprise on Yeezus is all the different angles it attacks from.

Don’t be so surprised. You’re excited. This record is exciting and intoxicating. “Yeezus just rose again.” Listen to “Send It Up” and look for King L’s timbre as a nice change up. And whatever that air horn is doing in the hook.

“I Am A God” is electronic, is trill, its full of echoes and panting. It makes you seize. “New Slaves” breaks down and changes its verse and movement, unlike the live version we were wowed with earlier. Justin Vernon leads us off on “Hold My Liquor” and sways in and out of “I’m In It,” where Ye commands masculine power over any listener possible. “Bound 2” is just as abrasive, “start a fight club/got a Brad reputation,” yet it’s romantic in the sampled hook. It wraps up the record nicely, probably foreshadowing that we’re all bound to fall in love.

But the best part of this record is “Blood On The Leaves.”

“Strange Fruit” is one of the most historically important songs ever recorded. And over a discussion about Yeezus with my favorite hip hop head, we wondered if “Strange Fruit” is common knowledge. I first heard it in an American history course as a freshman in college. Would “Blood On The Leaves” matter more or less if you did or didn’t know “Strange Fruit”, we wondered? (The phrase also appears elsewhere on the record.) It’s hard to recognize every sample in any track. And the expectation of 100% exposure to everything all the time is impossible. So would “Strange Fruit” resonate with you here? Or is the message negated by his inquiries about your “first time with Molly” over and over? Or does Nina Simone’s chime of “black bodies swingin’ in the summer breeze” catch your attention? With “Blood On The Leaves,” Kanye is poking at your brain, putting it in a place of panic with a wicked part of America’s past.

Billie Holiday first, and most famously, recorded this song in 1939. The “fruit” regards to the lynchings of Black Americans in (the earlier part of) American racism. Originally “Bitter Fruit,” a poem written by a teacher from the Bronx, Abel Meeropol (a noted white, Jewish, communist), it was published in 1937 in The New York Teacher. It’s a beautiful song, despite how sad it makes you feel. (Do yourself a favor if you haven’t heard it.)

I don’t need to argue that Kanye West is a popular artist, or that he’s bringing racism to the front on more than one track. I think “Blood On The Leaves” speaks louder than “New Slaves” and “Black Skinhead,” even if the latter are better, tighter songs and “radio” “friendly.” His willingness to put “Strange Fruit” to mainstream culture in 2013 speaks pretty loudly.

So, now comes the time where we can wonder if he could’ve “gotten away with Yeezus if it wasn’t for Dark Fantasy”?  Or “if it wasn’t for…” any other part of his past? Would it matter if this was a debut record? And is that so hard to imagine? Or does none of this matter? The discography is always important and I’ve talked about it here before. We can’t help but compare an artist to themselves, it’s what we all do. So why does Yeezus feel all the more special? Probably because it whispers, screams and cracks your spine.
I could just tell you that it’s just a record that’s 40 minutes long. But Yeezus is more than that. It’s a vessel and a theme song and chant along. Yeezus makes you want to feel all over. And if you don’t want to think about the racial messages West is shoving at us, you can think about the music. Records don’t sound like this. What he’s doing here really is remarkable. And if your next question is, “will it hold up?” The answer is yes.

One thought on “Yeezus, Mary and Joseph. It’s Here.”