Let’s Talk About The Beatles For A Second

Because when I’m at my parents house, the Beatles are pretty much the only musical exposure I get. If you haven’t heard, my dad is a Beatles-elitist. So much that I didn’t even think to start listening to The Rolling Stones or Bob Dylan until I was a senior in high school. The holy trinity in my family is Seinfeld, Star Wars and The Beatles.

Just the other day, we had 102.9 WMGK, Philadelphia’s Classic Rock Station (MEH CITY) on and their programming was Christmas Eve With The Beatles. Fine by me, honestly, the only way I can listen to the Beatles is on the radio and (yeah, yeah, I know) on vinyl. Either “Paperback Writer” or “Think For Yourself” or “Eight Days A Week” was on and my dad was saying something like, “Keith Richards couldn’t come up with that bass line if he had 100 years to do it.” This is just one of many obsessive overstatements my dad has made over the years.

Growing up, it is what we had in common. Idolizing the Beatles – and groups past, like Steely Dan (still do) and Yes. But it was when I went to college and discovered that there is more to life than 40+ year old music that I finally learned a lesson I couldn’t learn at home. I found myself introducing my dad to Pink Floyd’s Meddle and “Rock The Casbah” from the Clash. He skipped from the Beatles to – again – Steely Dan right to Chick Corea, Miles Davis, Pat Metheny. CCR never even snuck in there – unless it was the hits. Don’t get me wrong, dad loves Stevie Wonder and Chicago, but he hates Motown. Our whole family loves Joni Mitchell – even him – but there are some places my dad refuses to visit. A couple years ago I had to stop discussing music with him because I know he will never understand any other kind of genius that may be out there. I said to him, “Dad, Wilco are my Beatles. Tweedy is my Lennon and McCartney.” (If you know me, you know that the only thing I love more than music, is Wilco.) He was floored and couldn’t understand. “Sing me a Wilco song. Hum it,” he said. “Well, you can’t…really. They’re not that kind of band.” “Well then,” he replied, “they’re no good.”

That’s what we are dealing with here. Which is fine. To each his own.

And it’s not like he’s wrong about the Beatles. They are. No other band in the whole world will do what they did, “Name any other band that had 27 number one hits in seven years,” he’ll blurt out. I can’t. People know that the Beatles really are the best. Out of all the conversations I’ve had with people about music, I’ve only come across two people who openly hate the Beatles. (Coincidentally, they are both pompous asses.) Recently, my friend Faith invited me to a party where I, late in the evening, made a stir. I asked some kid (undergrads, yup) who their favorite band is. When he told me it was the Beatles, I told him that it was an unacceptable answer because everyone loved them. He disagreed and then tried to tell me that Abbey Road isn’t psychedelic, the argument escalated and more and more people got involved. Either way, I didn’t back down – because he is wrong.

You could fill an entire library with books about them. Books filled of photographs, stories, lyrics and art. All of it. Our household family Bible is an old hardback edition of Ian Macdonald’s “Revolution In The Head.” Dad will bust it out anytime. It’s full of underlined passages and notes in the margins. It’s a perfect accompany of every Beatles release – ever. Between my father and myself, we’ve rooted through enough books on the Beatles to find the best. We all know that Bob Spitz wrote a ‘definitive’ biography of the band (and has one coming out on Ringo soon, by word of mouth of dad.) My personal favorite is Geoff Emerick’s “Here There and Everywhere: My Life Recording The Music Of The Beatles.” It’s for audio nerds and recording enthusiasts. Emerick was just fourteen or something when he magically got a part time job at Apple Records as an engineer’s assistant. Lucky.

The worst might be Phillip Norman’s 2008 “John Lennon: The Life.” I bought dad a copy when it first came out. He told me he stopped reading and never looked back when he came to a major factual error. It listed The Ed Sullivan Show having been broadcasted on ABC instead of CBS (where it lived for 23 years.) A pretty big error. We never stayed around long enough to see if later editions had the error fixed. 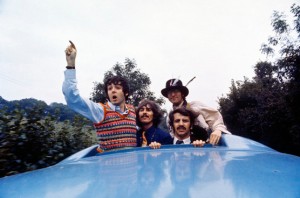 a still from “Magical Mystery Tour.” we had this poster in our house for many years. of course, now it’s long gone.

For Christmas every year, my dad receives at least two or three Beatles items. (Last year it was the CD singles of original A and B side hits – with original artwork.) Usually it is all he asks for. We struggle to find other, appropriate gifts. This year it was the blue ray special edition of Magical Mystery Tour the movie – which if you haven’t seen, it should probably be watched any other way than sober. With the stereo on high, we then watched Help! (A Hard Day’s Night is my personal favorite. But they’re all pretty funny. Monty Python before Monty Python. “Give us a kiss.”)

The Beatles now seem like a tradition to me. I cannot think about them without hearing my father in the background of their music, preaching to the choir about how they are absolute. Really, the only band that ever mattered. When I was in college, in addition to all my other radio shows, I hosted Breakfast With The Beatles every Sunday from Noon-2p. Listening to the Beatles – on the radio and anytime – always makes me miss that show. Arranging their music is a special talent that takes knowledge of the catalog. People think it’s harder than it actually is because it’s limited. But you all couldn’t be more wrong. You just need to know your way around the b-sides. No one wants to hear “Penny Lane” or “Hey Jude” all the time. You have to throw in “Why Don’t We Do It In The Road?” and “Kansas City (Hey Hey Hey)” and “You Can’t Do That” – which has one of the greatest drum tracks of all time on it. Go back and listen to Abbey Road and tell me that Ringo isn’t THE greatest rock drummer. Listen to the thick bass on “Paperback Writer” (while reading along to Emerick’s recording technique of rewiring a loud speaker backwards to be a microphone – to get the bass to sound like those Motown records McCartney loved) and try to change your mind. Just revisit these lyrics: “Sitting on a cornflake/waiting for the man to come/Corporation tee-shirt/Stupid bloody tuesday/Man, you been a naughty boy/You let your face grow long.” “But if you go carrying pictures of chairman Mao/You aren’t gonna make it with anyone anyhow.” Essentially, just listen to their records. What the Beatles did in seven years is remarkable. Yes, they were only releasing music as a group during the decade of change and turmoil. Sure, that had something to do with it. But I’ve been studying and listening to music my whole life. And I still haven’t come across any other group like The Beatles. I’m sure of it that no one else will.

Usually, my dad is right 95% of the time, about pretty much everything. He hasn’t been as sure of himself about anything else like he is of the Beatles. When he had the chance to meet McCartney once, he tells the story: “I shook his hand and I said to him – thank you for changing my life.” Ditto.

← Canadians Do It Better: Mac Demarco’s 2 Is Better Than You
My Favorite Songs of 2012: you should’ve Started Listening to these yesterday →