Whether or not you want to admit it, or even think about it, when you talk about hip hop you talk about race. Born in the Bronx and raised on repression, hip hop is a racial genre. It is also a protest genre, more important than the protest genres of punk and folk because it lives and dies for a race that, it seemed, America never wanted in the first place. Before you think I’m racist, I’m not. I want to tell the truth about hip hop. Or at least the truth I see in it. The short version of this story is that I took a Hip Hop Cultures class as a senior in college. It displaced me from my musical home base and made me question everything I loved about music. I learned race theory for the first time, through music. Just earlier this year I became able to listen to hip hop in front of other people. It has always been a private activity to me, and remains mostly as so. As much as I’ve read about it (let me suggest Jeff Chang’s Can’t Stop Won’t Stop or Tricia Rose’s Hip Hop Wars) and listened to it, it is a genre that will never belong to me.

The life span of hip hop has grown from the true underground to a world wide phenomenon.  It has already impressed upon other genres, like dubstep and most EDM (electronic dance music), and it lives in the pop world with it’s brother the drum machine and it’s (now) distant cousin, the sample. The pillars of hip hop (DJing, MCing, Graffiti, Breaking, and Beatboxing) do not support the weight of this mass genre anymore. Instead it comes from people from all over the world of every class and race.  Ironically, we support that of culture from a repression we caused. As American music goes, it is our best ability to steal music from races we repressed (and most often, claim it as our own): Rhythm and Blues>Soul>Rock>Funk and now>Hip Hop. “Elvis Was A Hero To Most/But He Never Meant Shit To Me.” Public Enemy is more to me than just the Long Island Sound that Fights The Power. Mos Def talks about it too on “Mr. Nigga”  and on “Rock n Roll”. With the recent split of Das Racist, a “gag” group that pointed out the very contradictory nature of their presence, we can only look forward to more ground breaking voices in the genre. One say, maybe like Action Bronson.

Bronson, who’s real name is Arian Asllani (yes, his first name is Arian), is from Flushing, Queens. Nothing new. He is of Albanian descent, maybe something new? And before he started releasing music he was an up and coming chef in New York City. It wasn’t until after I purchased my ticket to see him in the newly restored historic, local Howard Theatre that my friends pointed out to me that my first live hip hop show would be that of a white rapper. “At least I won’t be the only white person there,” I joked. 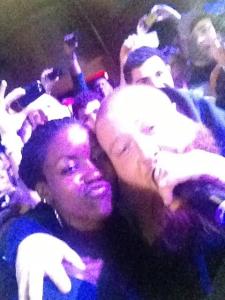 Attending with my friend Jackie, she assured me that it would be a great show. She has seen her share of hip hop, including just this year: Big K.R.I.T. (twice), Teedra Moses, and The Roots. It was, indeed an excellent show full of energy and spontaneity.  Bronson roared on stage with a big joint in his mouth and passed it into the crowd. Mary Jane was everywhere, unlike anything I’ve ever seen before at any live show. Someone from the Theater came down to scold people, telling them to put it away, but it eventually found it’s way back out again. A part of hip hop culture that I had never seen first hand, it looked like they really do smoke as much as they rhyme about. Bronson is a man of truths dirty and clear. At one point he joked, “I’m 315 pounds. Five minutes ago I was asleep. What the fuck am I doing here?”

At the very beginning when hands were up in the air, someone with crutches has made it to the front row. Bronson hoisted the kid onstage, as he had Cerebral Palsy, and sat him up on the DJ’s platform. The kid even rhymed for a bit to the crowd. We went wild. 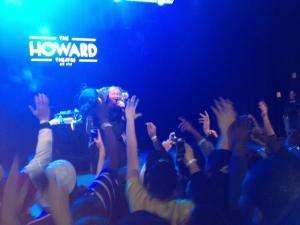 thats the kid, over his shoulders

Bronson later jumped down onto the floor (he did twice, actually) for a big portion of his set which lasted about an hour. As I lost sight of Jackie, I then looked over to see that Bronson had his arm around her. She managed to snap a photo. He spent a good ten or so minutes on the floor with everyone. “How the fuck do I get back on stage?” he laughed. A man of his size doesn’t just hop up four feet.

The second time he jumped down into the crowd, he requested some dance moves. I didn’t dance, or pogo with the crowd. But I did feel his endless energy as I came face to face with him.

Overall, I felt confident as I watched the night progress. It didn’t seem to be about race. The image of him hoisting up the handicapped kid might have been that equalizer. Nothing else mattered but the music and verse. It was a great, high energy show. People went nuts for him. But in the end, I realized that hip hop might not be a genre of live music that I want to participate in all the time. Not because I feel out of place. It just became exhausting. The music was perfect. And Bronson made it look like the hardest, effortless work in the world. Everyone was a part of the show. It belonged to all of us. But watching someone stand and pace around with a mic to their face for an hour kind of got old to me. Even when you have power like Bronson does.

← my favorite live shows of the year
the beginning of many in my year end list: Tame Impala/Lonerism →