my obsession with vinyl and nostalgia finally surfaces

recently, when Hurricane Sandy brought us “you can’t go outside. ever.” weather, my roommate and i indulged in cabin fever. she finally sat down to watch Almost Famous. a movie she always assumed she hated because of an obnoxious roommate who pretended to be Penny Lane (over the course of our friendship, this same “Penny Lane” became my nemesis. she’s pretty much the worst.)

Almost Famous is a movie i’ve always loved. a movie i wrote about in the eighth grade, a ‘what’s your favorite movie?’ type paper. for Mrs. McNamee, the bird woman. although, ‘loved’ is to put it lightly. i found myself watching it on TV tonight and quoting it aloud. it was making me crave Zeppelin records. and i instantly remember everything about when i started listening to music. and this used turn table my dad bought for me that was luckily broken by a cousin and then replaced with – get this – a band powered turn table that has start and stop buttons and two speeds from…Best Buy. (easily one of my prize possessions.)

if you haven’t read Bangs’ writing, stop reading mine and go read his

i had watched Almost Famous so many times in junior high and early high school that i couldn’t watch it for years. (it wasn’t until i saw Goodfellas that it got knocked out of THE top favorite movie spot.) the re-broadcast of it to my brain two weeks ago, and then my recent stint into Philip Seymour Hoffman as Lester Bangs tonight reminded me of why i love this movie. and why it is an all-time favorite. it reminds me that it was the beginning of my monstrous love affair with Led Zeppelin. the first band i ever really loved. and how i became infatuated with the era of rock and roll. how i used to carry around Rolling Stone’s 500 Greatest Albums issue to study and debate what was wrong and right. (you’ve heard of the Rolling Stone history of music, right? well, it’s real. i lived it in high school.)

i first heard “Tangerine” on the Almost Famous soundtrack. then i went to Tower Records (remember those?) where i spent all my money in high school and bought it on CD (which i still own). and listened to it over and over. the track listing on that record is unreal. the backwards tape looping (date check: LZ III, 1970), the use of the mandolin and steel guitar, plus the presence of the moog synthesizer. oh, and Led Zeppelin’s favorite, the organ. need we say more? yes. there’s the thrash of “Immigrant Song”, followed by “Friends” and “Celebration Day.” the perfect opening songs. then into the ultimate sex symbol song “Since I’ve Been Loving You” and the stomp of “Out On The Tiles”. egads, why don’t they make records like this anymore?

so i’ve spent the night listening to records and staring into the internet. it moved quickly from Led Zeppelin (III>IV>Hoses of the Holy>II) to RAMONES (debut self-titled) to Joni Mitchell (Miles of Isles) and over to CCR (Live in Europe.)

just today, i dont remember how it came up, my older coworkers asked me how many records i have and was surprised to hear me say “a couple hundred.” i’ve actually never counted. and they’re not all here in the District with me. plus most of my dad’s collection is mine including the Live John Mayall and the Charlie Parker (some stamped with “Property of NYU” and “CBS Records”, Bowie’s Changes and Steely Dan’s Aja.) and my aunt Angela left me most of hers (filling out collections i never knew i wanted or needed, like U2 (if you know me…) and the Smiths.) i did the math and i’ve been buying records since i was 15. you know what, let’s just call it ten years. although this doesn’t look like ‘a couple hundred’ i guess its time to count.

i suppose it’s three crates worth

listening to records makes me nostalgic. watching Almost Famous makes me think about what i listened to in high school (The Beatles, Jefferson Airplane, Queen and Billy Joel) and the dweeby classic rock nerd i was until i became a jazz DJ (anyone would rather be on-air at noon rather 4am in the winter of Ithaca.) and then subsequently, i found out about reggae and the blues. you see, my mom sang along to Joni Mitchell my entire childhood. and still does. she introduced me to my favorite “Cactus Tree” (“she’s too busy being free”). my parents played Paul Simon’s Graceland endlessly and my dad still sings along to Elton John’s “Goodbye Yellow Brick Road”. my sister bought me Ladies of the Canyon on vinyl as a birthday gift. and the first record i ever bought, i’m sure with my mom’s money, was the full Tommy Tutone 2 with “867-5309/Jenny” on it. $10.  i can tell you where every record  i own came from. and i can tell you the inside of every record store i ever bought vinyl in. i have distinct memories of those cities from Saratoga, NY to Manhattan and Brooklyn and Ithaca,NY. everyone has a college record store home base: Angry Mom Records (where I’ve found two of my prize favorites: white label promo Velvet Underground ‘Loaded’ and Led Zeppelin Live 1969 at the Filmore West bootleg with ‘disguise’ pressing stamps.) (i also wrote about Angry Mom for a non-fiction writing class.) Amoeba in Hollywood is incredible, and easily the best store i’ve ever been in. although i never bought vinyl there because i didn’t have a record player when i was living in LA, i spent plenty of money on CDs since i lived in my car (MC5/Back in the USA, Bon Iver/Blood Bank EP, and the unforgettable local LA reggae band, The Lions.) i can snobbishly say i’ve bought something in all three Amoeba Musics. the one on Haight in SF rivals Hollywood’s store quite well (got me a b-side recorded version of The VU & Nico in green wax and Hello Nasty in clear yellow) and Berkeley just seems quaint in comparison (nice 45s and book section though). i once saw the man who played Mr. Rosso on Freaks & Geeks at the Amoeba Hollywood store, the same day The Lions were playing a free at noon show, when we just happened to stumble there one afternoon after traipsing around Hollywood.

Smash! here in DC is great, on 18th street. they have terrific loads of movie soundtracks (including Fast Times at Ridgemont High, Pretty in Pink, St. Elmo’s Fire, Midnight Cowboy, Easy Rider, Star Wars, …the list goes on. and i want them all.) and Crooked Beat has a plethora of mostly new and re-released wax wrapped in cellophane. lots of Wilco, White Stripes and Elliot Smith. strange that i haven’t gone hungry yet spending money on new records. but i never go for new music on vinyl. i know it was recorded digitally and just put onto wax. i’ll buy some new music on vinyl here and there (The Monitor/Titus Andronicus and Wavves/Life Sux EP…and the soon to arrive SF Castle Face Records and Friends cover album of the VU & Nico in banana yellow wax. if the reader is counting, that’s right, i have two alternative versions without actually owning VU&N. its hard to find not pressed to death as the millionth issue.) hence, i only usually buy new music on vinyl when they’re perfectly worth it. but i mostly hold out for the gems, like the first pressing edition of Patti Smith’s Horses that i found in the East Village. (i like to think that she touched it. or maybe even John Cale.) 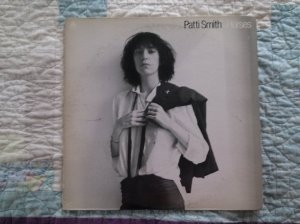 apparently, you can tell because of the white label of “Horses”

Almost Famous is a portrait of rock music and America. and of rock music IN America in 1973. it is a portrait of writing that i wanted to be a part of. the movie that made me  want to ‘grow up and become a writer.’ the scenes when Bangs visits the radio station and talks about “angelic choirs” and how “music follows you around in your car and in your headphones” steal my heart and grow my imagination’s vocabulary.

and i think about Cameron Crowe a lot more now than i used to. i wonder what lines were his, and if he overheard and slyly stole some. although i think he’s remembered too often for the longer, denser quote: “the only true currency we have in this bankrupt world is what we share with someone else when we’re uncool.”  rather the other fun historical pieces in there. like the hints for Bangs’ love affair with Lou Reed and his distaste for Detroit. (i’ve always wanted a ‘Detroit Sucks’ shirt.) and his addiction, and strange overuse of cough medicine. although, it what he says in the end that i’m sure i glazed over in junior high school but now, i find the perfect value it: “you have to make your reputation by being honest and unmerciful.”

← Fiona Apple is better than you (and me.)
my favorite live shows of the year →

One thought on “my obsession with vinyl and nostalgia finally surfaces”