Not often enough do I use this site to spill my guts. Lately it’s been obsessions, list makings and internal arguments. But I’ll stick to just one for now.

For a while my obsession was trying to figure out What The Hell Is Really Going On With Ariel Pink? SPIN devoted some 5,000 words to him on a feature and LA Weekly called him the ‘King Of Whatever.” I’m seeing him next week at the 930 club here in DC. And I’m already not looking forward to it. I’ve been told by friends who’ve seen him live that it’s always a toss up, he can either leave the stage or provide banter like a disgruntled teenager (but he is actually 34. Which is something I think everyone forgets. And shouldn’t. Note to reader: he’s not a youthful hipster doing this. Even James Murphy says he’s to blame.) He’s had a couple of on stage meltdowns too. I can’t even get through Mature Themes. It’s weird, bizarre, and full of awkward garbling and phrase-making. There are no interesting guitar solos, or piano tracks. It sounds like a soggy blur.

SPIN calls him a genius who fills in the blank (was there one?) between d-side 1960s strange and the ‘indie’ we have today. Apparently Pink also ignored grunge on the way, they say he spent his early days “writing and recording what arguably has become one of the most influential bodies of work in pop music this side of Nevermind.”

I’m still not sure I get it. Where is the allure? In addition to featuring him, La Weekly ALSO called him a psychedelic babbler (which he is) and that he layers himself in irony. Arguable, yes. But then why are most music outlets excited about him and his music? 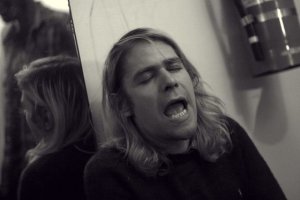 Mature Themes sounds like he wears Zappa and Beefheart on his sleeve . It’s full of droning synthesizers, altered vocal tracks, raspy voices, echoing keyboards. It could almost soundtrack a beta aged video game. And yet is still full of sweet single note guitar hooks. The uncomfortable feeling he assures us of is definitely there. Its a feeling that prevents me from getting through the record. I skip forward through tracks or either turn it off from imaginative frustration. Track seven, “Schnitzel Boogie,” is so soaked in lo-fi reverb that you could choke on it.

I’m sure most lists at the end of the year will include it as one of the greatest. Pitchfork AHEM of course gave it Best New Music. And Sirius XMU featured Pink hosting afternoons for a week with Jenny Eliscu (who seems to be queen of the hipsters herself, while still writing for Rolling Stone, cover features and all.) I can’t tell if Ariel Pink is trying to be a certain way or if he really does just exist as so. Some tracks on his record seem un-listenable, see Symphony of the Nymph. The titles are thrown together phrases (Farewell American Primitive) that don’t really mean anything. And the lyrics don’t clear anything up.  On Is This The Best Spot, the phrase gets repeated over and over again with a chorus full of hooks and chants of meaningless words.

Listenable tracks are the single “Only In My Dreams.” (Which could be the b-side hit from 2009’s Before Today‘s single Round And Round. They both have that guitar hook that tricks your brain into singing it over and over again.) The title track which remains soaked in sun, and the closing track Baby – which is a cover from Donny and Joe Emerson. It sounds almost exactly like the original (and at first when it aired on the radio I assumed his record would be full of 70s soul. I couldn’t have been more wrong. And disappointed.)

Apparently he “inadvertently godfathered” the chillwave genre. Pink says he “knew he was doing something that sounded like the trace of a memory you can’t place,” (really, are we listening to this?) and that it’s ‘his thing’ to make people feel uneasy. This SPIN piece makes him sound constantly devastated, but sure that what he is doing is right. He acts like he wants to be left alone and loved at the same time. A troubled upbringing and breaking up with a girlfriend apparently makes Mature Themes. But that doesn’t make it great.

Pink says about Grimes (who I am not a fan of, but that’s just because she’s not for me.) “Every time I hear her…I hear a little of myself. It’s obvious, but it’s cool: You can see the potential for something.”

What kind of pretension are we dealing with? It’s so thick, you can’t cut it with a knife. It might not even be real. It will probably vanish in front of you, which I’m sure Pink would take credit for.

In the end we have his record, Mature Themes. It’s not something you would throw on at a party. Or play for a long car drive. It doesn’t challenge me sonically or structurally with innovation or poetry. And Pink, while strangely interesting, isn’t humble. His confidence plays out by him essentially taking credit for a plethora of current artists who make music. If he “inspired an entire generation” why don’t I feel inspired by his music? I don’t see him in other artists. All of his records bore me. I can’t make it through the highly regarded, The Doldroms either. (Which reminds me, not that I care, but Pitchfork gave it a 5.0 but still called him masterful and sincere. UGH. ) Ariel Pink is a spectacle. And why I try to figure it out I also am waiting for it to pass. But I have a feeling it won’t.

← the xx/Coexist: uneasy about English Pop. beautiful yet unsatisfying.
Japandroids: or how i learned to stop worrying and love alternative rock →