When it was first announced that The Black Keys were playing an arena tour, I was disappointed. Disappointed because I knew at that point the only place I could ever see them would be in an arena. [Unless one day in the far away future they’re making their comeback at Cafe Wha? and I just happen to be in Manhattan.] We wouldn’t be seeing them in any small rock clubs from now on.  Not only are they doing an arena tour, they’re selling them out. Music nerds, like myself, haven’t been able to understand why this is happening. Was it the Grammys? Was it their success of Brothers so quickly followed by El Camino? No one knows. All we know is The Black Keys are a universally accepted sonic now: everyone enjoys this band on some level or another. You’re either from Akron, [or any part of Ohio for that matter, it’s basically required of you. Which no Ohio native will argue with.] you can’t get the hook from that car commercial out of your head or you just love rock music. Either way, you pretty much love The Black Keys. 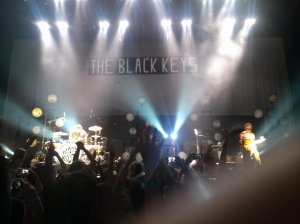 How can I argue with that? After seeing them live, it’s hard to do. Although, I do have qualms with the evening. Too many people in a crowd is incredibly overwhelming for four hours. They’re all rubbing up against you, spilling their beer on you, expecting you to see over them. It’s a real effort standing in an arena crowd. Then there’s the sound. Not only is there nowhere for it to escape [spoiler alert: it stays in your head for a good three days] there is no where you can go to escape it. Running to the bathroom to refresh yourself is not an option in an arena. Despite how close we managed to get and how dumb it is to leave, I won’t lie. It crossed my mind a number of times.

But I can’t lie to myself anymore. The Black Keys are one of, if not the, biggest rock band in America right now. We don’t need to talk about their music. You know what it sounds like and you know their songwriting is a tightly knit genre of blues rock. They played all the songs I’d hope they’d play. Like Nova Baby, The Girl Is On My Mind, Have Love Will Travel, Strange Times, I’ll Be Your Man, Ten Cent Pistol, almost all of El Camino and Brothers as well as Your Touch. Their force never to be reckoned with is Patrick and Daniel and The Black Keys. Both players, and the two who accompanied them for most of the set, can play their instruments. And they know how to put on a show. I don’t know how they don’t get sick of the songs they play every night in every city. But they never looked tired. They only looked grateful to be there. A few jams here and there, and teasing the crowd during the breakdown of Little Black Submarines, now, it’s no secret how they got here.

Dan Auerbach really knows how to play the guitar. And even though it felt hard for him to keep time during Sister, and a few other songs, Patrick Carney can play the drums. That is why they are selling out arenas. And that is why we all love them. The Black Keys write their songs and perform them just as they wrote them. They love what they do and you couldn’t pay them to hide it. From the art design of their set to the huge ass disco ball lowered during their too short encore [please, for how hard we had to work for it, we could’ve used more than four songs] the thought they put into what they do is too big and too loud to walk away from.

They sound great on the record and despite some tempo changes, they sound great live. They Black Keys deserve your attention, and yes, they deserve your money. There is no harder working band in America right now. For ten years they’ve been putting out records. It’s time you start listening to them.

← gone punk
back to back sold out: Megafaun and Dr. Dog →